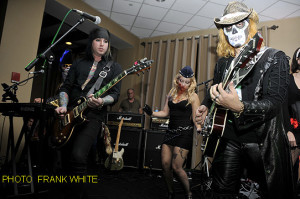 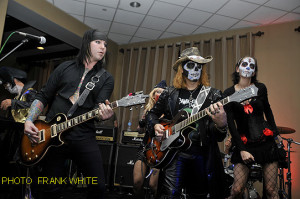 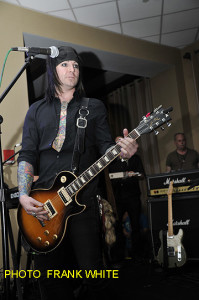 Photos and text by Frank White

The Chiller Theatre Expo which features celebrities from TV, horror movies, bands, biker shows, wrestlers, horror artists, pin-up models and scream queens celebrated its 25th anniversary at the Parsippany Sheraton in New Jersey on October 23-25,  2015.
The expo also had a wide selection of toys, magazines, posters, t-shirts, records, cards, horror paintings, autographs and oddities items. Eddie Mika who is director of guest relations for the expo had a table selling horror items along with live bees incased to show his passion for making raw honey and to show fans up close how honey is made and sold the tasty raw honey in jars.
Because this year’s expo featured the 50th anniversary of the TV series  Batman  with Adam West, Burt Ward, and Julie Newmar, the expo brought the Batmobile, Batcycle, and Batboat, for fans to pose and take pictures with these famous TV crime fighting arsenal. They had as well the Lost in Space The Chariot mobile and the Robot B-9. and part of the TV show cast with Bill Mumy, Angela Cartwright, Marta Kristen, and Mark Goddard.
Some of the other celebrities were from The Warriors/ Furies, Madmen, Hee Haw, Petticoat Junction, Carrie, The Outsiders, Lee Majors from the Six Million Dollar Man, John Zacherle ( The Cool Ghoul )  Frankenhooker  ( 25th anniversary reunion ) Richard Thomas from The Waltons,  Beauty and the Beast as well as others stars filled the main floor of the hotel for fans to buy autographs and photos with their famous celebrity personalities. .
Chiller also had  horror movies, Q&A sessions, the Chiller Auction and Model contest and Art awards and artists like Ed Repka, Ken Kelly, Ric Frane and Marcus Boas were selling their painting, and drawings, along New Jersey’s Bat Man Joe D’ Angeli with his Live Bats along with photo ops on the 2nd floor.
Members of the original Alice Cooper band  Dennis Dunaway, Michael Bruce and Neal Smith called Billion Dollar Babies ( their stage band name )  had their own room set up with memorabilia from the band’s long history for fans to marvel at and take photos with  band member. They were also selling a book about the band’s wild history during the early 70’s.
This year’s  Saturday night’s Halloween party had fans dressed up in many crazy costumes followed by the Rock and Roll Joker’s Ball Halloween party concert with music performed by  The Test, Billion Dollar Babies, The Dead Elvi with special guest Bill Mumy from Lost in Space, Tim Cappello of the Lost Boys movie, Cheetah Chrome of the Dead Boys, Ace Von Johnson of Faster Pussycat,  The Undead,  Pat Horgan and Thunder Road with Gregg Woods, Richie Scarlet band, and The Accelerators.
There was a after party after the concert for staff, friends, and some celebrities to celebrate the 25 years that founder / producer Kevin Clement started when he had a store dedicated to the horror genre back in late 1980’s and his first expo was held in Rutherford New Jersey in 1990.