Black Sabbath may get a day dedicated to them, if council officials follow the recommendation of having the city to cash in on the renewed interest in the band. 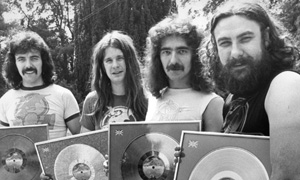 According to the Birmingham Post, Black Sabbath may get a day dedicated to them:

Now their unique place in the city’s musical history could be celebrated with a day devoted to the band, if council officials follow the recommendation of a new report which urged the city to cash in on the renewed interest in the band.

The Destination Birmingham document said: “Black Sabbath’s reunion and their agreement to headline Download Festival in June is an opportunity we should not miss.

“Early discussions are taking place about how best the city should celebrate this and the council should be supporting any celebrations.”

The four-piece revealed last week they were planning to finish writing their new album back in Birmingham, while guitarist Tony Iommi is also battling cancer.

“Given this, it is us saying to the council that we need to celebrate the fact these people come from Birmingham and there could be various ways we could do it.

“We could hold a civic event and potentially invite the band along to say thank you from Birmingham for the contribution they’ve made to music in our city.

“Ozzy Osbourne came from Aston and he’s an international star.

“This report is about what’s happening today and in the future, not just in the past.

“The music scene is really bubbling along in Birmingham at the moment. It’s an interesting time for new bands and we want the council to support that.”

She said: “I think the idea of a Black Sabbath day is absolutely brilliant.

“Why not? They’re an iconic band and part of Birmingham’s enviable music heritage.

“From our own research, UK Music has provided clear evidence that music is an incredibly powerful tourism magnet.

“With a concerted music tourism strategy, there is potential to achieve even more.”

A Black Sabbath Day would ape the celebrations staged every year in Liverpool in honour of the Beatles.

Last year’s Beatles Day was the fourth annual commemoration of the Fab Four in their home city and thousands of pounds were raised for charity.

Manchester also holds a Manchester Day, which aims to celebrate all things Mancunian.