Back in 1990, Powerline Magazine interviewed Europe’s Joey Tempest and Kee Marcello about their new album at the time for the March issue. 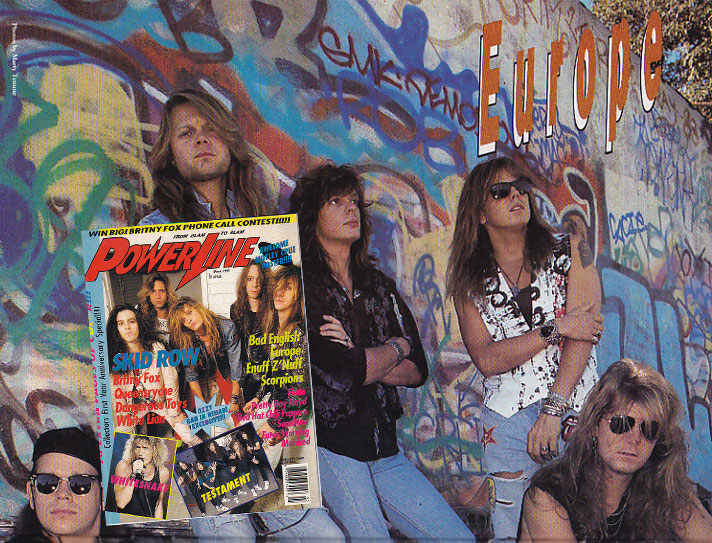 It’s hard to believe that this is the same Joey Tempest we’ve all come to know and love as we sit talking over drinks poolside at Hollywood’s infamous Sunset Marquee Hotel, his fluffy haired look is now replaced by a more natural, straight haired coif tied back in a pony tail. But, yes, as we begin to talk I am assured that it is indeed not an impostor, and along with guitarist Kee Marcello we discuss Europe’s past success, current pre-production and future goals.

Europe has been holed up at a rehearsal studio in Los Angeles for over two months writing songs and recording demos for their third American release due out early this year. And there seems to be change int he air for this band of Scandinavian rockers, not only in the frontman’s appearance but in the direction of their music as well.”Since we’ve been writing here there’s been more edge to the songs, I think. A little more statement wise. The band has been going through some hard times as far as business and personal things, so that might shine through in the lyrics a little bit.”

As far as Tempest’s new look, he explains, “I’ve got straight hair now, it’s kind of natural which I think is good. I don’t know if it’s a statement or anything, but we just want to make the music do the talking instead of people wondering what kind of hairspray we use.”

And the new music will definitely do the talking, as Joey and Kee give us a preview of some of the material they’re working on now. One tune is called “Yesterday’s News,” and “that’s a little bit about business, some persons that we thought we trusted that can’t deal anymore, things like that,” Tempest explains. Another song titles “Bad Blood” is about the crazed rock and roll lifestyle, “Wild Child” chronicles life on the streets, and there’s a groove called “Seventh Sign” dealing with what Marcello calls “the religious myths.” Those being some of the uptempo songs int he works for the band’s next release.Ken then tells me that “There’s a ballad, too, called “Don’t Know How to Love Anymore.” The title alone evokes passion, I point out. “There you go,” Joey boasts proudly, “That’s what it does to you. It’s definitely a power ballad.” The frontman/writer explains that “some of the lyrics are going to be about being down about certain things, but the fighting spirit’s gonna be there. There’s always going to be a solution to everything, it’s gonna be a cool thing.”

As far as change in sound, guitarist Kee Marcello explains that “a lot depends on the relationship with the producer,” but, he emphasizes, “it’s got to be a band thing.” Joey adds, “we like to do a lot of pre-production work. We don’t want a producer to go in and say, ‘okay guys, I’m gonna take over, we’ve gotta rewrite this, rewrite that.’ We’ve never done that, although we do like to have some input.” Kee maintains that on the next album one major goal is “to keep the live feel” on the record. “We’re jamming and improvising songs,” the guitarist continues, “the songs are there and the concept is there but the formula is different.” The concept of the next Europe record, he tells, “will be the way we like to play live being captured on vinyl, the songs are there and the melodies are there, but the way we’re doing it will sound live.”

“It’s so much more fun for us to play live,” the danish vocalist explains, “even in the past it has worked better playing live than doing albums. So we really have always had this problem to capture ourselves on vinyl. We’ll do this album and it’ll probably sound like a live album without an audience.” And just how does this talented frontman classify the Europe sound? “There’s really no answer to that,” he says, leaning back in his chair, “it’s just a band. It’s like when a producer asks what you want to sound like, how do oyu want to sound? Kee has his sound, he’s got his guitar, and I’ve got my voice. We sound the way the band sounds, loudish and hard. Lots of guitars, still a lot of melodies.”

The band had a great deal of success with their debut American album, The Final Countdown, and although their second release, Out of the is World didn’t fare as well, they never compromised their style or ideals. “The biggest lesson I’ve learned,” Tempest reveals, “probably is not to take everything too seriously. Because for a while when (The Final Countdown) took off it got so serious. You get everyone on your back, record companies, business people. You take it too serious. That success has a lot of disadvantages, with the follow up up and the pressure of making a new one. You gotta have fun. I think that’s what I’ve learned.” Right now ‘Plan A,’ as Tempest terms it, “is just to make a good album and make a long road tour. This is our life, we don’t do anything else!. It’s a team, it’s what you do, it’s your life. The fair-haired singer says that at this point in Europe’s career he feels as if they are starting over, and I wonder what he would do if he was not involved in music. “There is no Plan B,” he laughs, “that’s the problem! That’s why we’re doing it, that’s why we’re doing this interview, there’s no Plan B!” The original Joey Tempest “Powerline Pinup” that ran in the March 1990 issue. Photo was taken by Marty Temme

Well, it’s getting late, Joey has long since finished his spaghetti and Kee and I are still drinking, as various staff members at the Sunset Marquee pass glances at our table of rockers wondering just how long we planned on staying! Just how do these Scandinavian rockers handle their many fans, I wonder? ” we just slap them in the face and say go away,” Tempest jokes as they break into laughter, “as you say in New York, we say ‘f*ck off!” Seriously folks, the singer continues: “We’ve always tried to take care of them as best we can.” Kee adds: “After all, they’re the ones that are buying our records and buying tickets!”

All kidding aside, these rock and rollers say that, “as long as you’re happy with the product you put out, it will be a success,” the outgoing guitarist explains. “If you’re happy with it and if you’re a good band, it’s going to show int he sales, too. If you like the songs and you like playing them, it’ll work. It’s easy to tell if someone’s doing it for the money.” Joey agrees: You can hear it on the album if it’s that way.”

As far as future goals for the band, the ever-friendly Tempest stresses that “of course it would be great to outsell The Final Countdown, and we did about six million on that one. But the emphasis now is on America. There’s a chance that we can go out and play stadiums. That is, ‘Plan A'” Kee chimes in, “we don’t have an ultimate, fantastic goal with the band. We’d like to keep up the good work writing songs, doing albums, successful tours, and jamming!” Tempest’s dreams include getting more established musically. “We’re pretty established now, but we really want to establish ourselves more here in America. We’re pretty much known for a few hit songs and the videos. That’s not really what the band’s about.”

“We’re a live rock band, that’s the main thing I’m concerned about.” As we conclude and decide to head off (before we’re kicked out!) Joey adds, “I want to get that across come see Europe because we’re a live band that really kicks!”

1 Comment on Print Archive: Interview with the band Europe, March 1990