A day before the Rock and Roll Hall of Fame induction ceremony, Powerline veteran scribe Carol Anne Szel had a chance to ask KISS drummer Eric Singer about the Rock Hall’s long-lasting KISS snub and the recent Axl Rose controversy. Here is what Eric had to say about all of it.

A day before the Rock and Roll Hall of Fame induction ceremony, Powerline veteran scribe Carol Anne Szel had a chance to ask KISS drummer Eric Singer some serious Rock Hall questions: The long-lasting KISS snub and the recent Axl Rose controversy. Here is what Eric had to say about all of it:

Eric Singer: I don’t know Axl that well, but he should do what he wants. I don’t always agree with the choices he makes or how he goes about it. And I think a lot of the guys that are in a band with him, they’ll try to justify it or they’ll say whatever. Because the bottom line is they don’t want to lose their gig. And they’ll lose their gig probably if they really say what they feel. But I think that he has a right to do whatever he wants. And in some ways, honestly, I kind of think, ‘You know something, that’s pretty cool of Axl.’ I think it’s pretty cool that he’s not only thumbing his nose at them, but that he’s giving them the middle finger. I think it’s cool. It’s like ‘Who the fuck are you guys to dictate what should and what shouldn’t be?’ It’s almost, in a lot of ways, if you want to look at it from this point of view, he kind of has a voice for a lot of people who think the whole thing is kind of a joke.

[pullquote_right]Look, I think the Rock and Roll Hall of Fame — and the idea of one — is a very cool thing. But the process by which they go about it is ridiculous.[/pullquote_right]

Look, I think the Rock and Roll Hall of Fame — and the idea of one — is a very cool thing. But the process by which they go about it is ridiculous. They should put a ballot out where people can call in and vote. Just like they do for American Idol or just like they do for sports All-Star teams. Yeah, some of it’s based on popularity, but that’s what it’s all about. The reason bands are popular is because people like them.

Carol, it’s like you, me and a couple of our friends decide to form a club because we’re all real wealthy and we’re going to call it the Hall of Fame and we’re gonna pick all these cool bands that we really like. And then we go ‘Yeah, I don’t like Motley Crue but I like Alice Cooper, so we’ll put him in.’ ‘Yeah, Motley Crue … I never liked them either. Okay let’s not put them in.’ That’s basically what it comes down to, that’s the attitude. To me it’s ridiculous.

Like Deep Purple. “Smoke on the Water” has one of the most replicated riffs ever. When you were a little kid and you got a guitar, one of the first songs you tried to learn back in the day was “Smoke on the Water.” And they sold millions of records, they were huge. I mean, there was a time when (they were) one of the biggest bands in the ’70s for sure. And they definitely had impact, there’s no doubt.

So my point is like ‘What is your criteria based on?’ The reason you have merchandising and all the stuff bands do now — like tee shirts, the name on your guitar picks — that was by KISS. KISS definitely influenced bands. So much of big shows and productions and all the pyro. If KISS didn’t do that, all these bands wouldn’t be doing that today. You wouldn’t have had a Motley Crue. Like Slipknot, Manson … 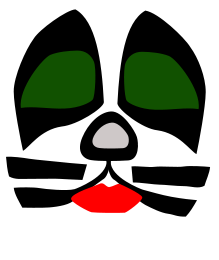 I mean, KISS won the People’s Choice award in the late ’70s [for “Beth” in Favorite New Song category], even over bands like Led Zeppelin. So now you say they don’t deserve it? Tell me one reason why we shouldn’t be in the Hall of Fame? It can only be one reason, because somebody doesn’t like them.

Listen, at the end of the day everybody has an ego. And it’s like this, when somebody says they don’t like you, even if you say you don’t care, well, maybe you are indifferent and don’t really care much. But deep down I think nobody likes to be disliked. But I think what’s ridiculous is when people don’t like you for no reason at all. You know, everyone can choose their reason why they like or don’t like something, but to just dislike somebody when you never met them and don’t even know them … yeah, that makes a lot of sense. But these people think that way.