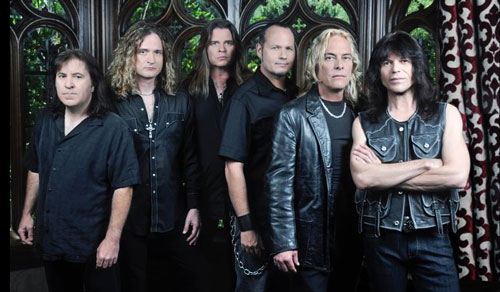 Some fans figured that with the passing of Ronnie James Dio in 2010, one of metal’s greatest voices of all-time had been silenced forever.
But Dio’s music will live on forever, and many of his friends and/or former band mates are making sure of it, as they have reunited as Dio Disciples – a concert celebration to the former singer of Black Sabbath, Rainbow, and Elf (and successful/respected solo artist). And while Dio Disciples has already performed overseas, US fans have waited patiently for their chance to catch the group. Soon, their wish will be granted.

The band (which is comprised of singers Tim “Ripper” Owens and Toby Jepson, guitarist Craig Goldy, bassist Rudy Sarzo, keyboardist Scott Warren, and drummer Simon Wright) has announced a string of dates (with more to be announced), which as of now, kicks off on September 22nd at the Chance in Poughkeepsie, NY, and wraps up on October 9th at Trees in Dallas, TX.
Keep your eyes peeled to Dio Disciples’ Facebook page for announcements regarding additional US tour dates.

Touching upon almost every era of Dio’s stellar career, you can expect to hear faithful and heavy renditions of such classics as “The Last in Line,” “Rainbow in the Dark,” “Holy Diver,” “Heaven and Hell,” “Neon Knights,” and “Man on the Silver Mountain,” among countless others.