It’s pretty simple, Cult fans. Don’t miss your chance to see the band on this tour. Here is a rundown and some photo galleries. 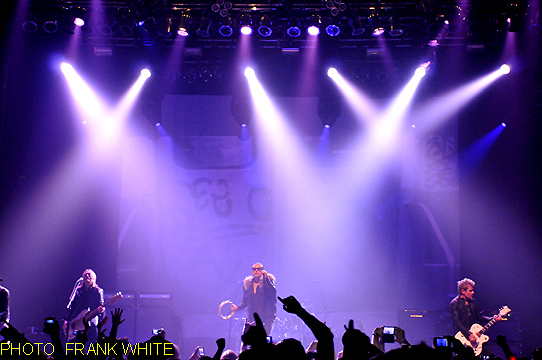 Terminal 5 in New York City does draw its share of complaints from its patrons. All you have to do is go online and read the comment section on a variety of NYC culture sites. The main complaint is the view of the stage, or lack therof. The general admission, standing-room concert venue always has a very crowded floor space and fans edge for a view from the balconies. Even the VIP balcony doesn’t guarantee you a decent view. However, with a vibrant band like The Cult, the music energizes you no matter where you stand.

Against Me! and The Icarus Line opened, and there is no doubt Against Me! is a damn good band — it just comes down to a matter of taste. To me, they’re songs are hit or miss. Some songs are razor-sharp, solid and straight-forward (the newly penned “Transgender Dysphoria Blues,” for instance). Other songs, are dominated by shout-out choruses — more power pop than punk — that can test your patience. And I’m not sure if vocalist/guitarist Tom Gabel’s gradual transition into Laura Jane Grace has had a change on any vocal tones but at certain times it did sound like Bret Michaels fronting the band. In fact, if I closed my eyes “I Was a Teenage Anarchist” sounded like Poison onstage playing modern punk rock.

Gabel’s transitional journey into Laura Jane Grace is being chronicled very publicly, and Gabel — now officially going as Jane Grace — is gathering a lot of support from the rock and roll community. On this night, the legendary Joan Jett joined the band onstage to give her support (see photo below). The performance was one for the memories, as they played the Replacements’ “Androgynous” for a delighted crowd. Then to The Cult …

Opening with “Lil’ Devil” and closing the encore with “Love Removal Machine,” the Electric album was well represented, to the fans’ delight.  “Wild Flower” was even introduced by Astbury as a song for all the “headbangers” in attendance. However, Sonic Temple‘s “Fire Woman,” the most polished of all Cult songs, was by far the most well-received. The inclusion of early hits “Spiritwalker” and “Horse Nation” was a very pleasant surprise for the die-hards, and Love favorites, “Rain” and “Nirvana,” were nearly as fresh as ever.

The new songs, the best of the bunch from Choice of Weapon, were primitive beasts — “For the Animals,” “The Wolf” and “Lucifer.” And the live, raw performance of “Honey from a Knife” — with its distinct chants — had a better presence than the studio version.

Ian Astbury and Billy Duffy are always the epitome of cool. There was nothing different on this night. Astbury in dark shades and Shaman fur uniform, howled magically and twirled and attacked his tambourine with graceful anger, while Duffy’s stature — dressed in all-black attire, hair-tufted, guitar as big as his torso — was at its rockin’ best.

Wrapping up, “The Phoenix” was the best song of the night. With its swirling, gothic drive and dynamic guitar leads throughout, the song is an overlooked masterpiece on the Love album. Performed live in 2012, it was practically transcendent.

It’s pretty simple for Cult fans. Don’t miss your chance to see the band on this tour.

Notes: Ian Astbury told the audience the story of first coming to America in 1984, and playing the legendary Danceteria in New York City that July. Booked by famed music promoter Ruth Polsky, Astbury mentioned, sadly, that she was killed outside the Limelight discotheque in Chelsea by a runaway cab two years later in 1986.

Frank White took all the photos for the photo galleries below.