KISS return with “Monster”, the 20th studio album in their historic career, set for release in October through Universal Music Enterprises. 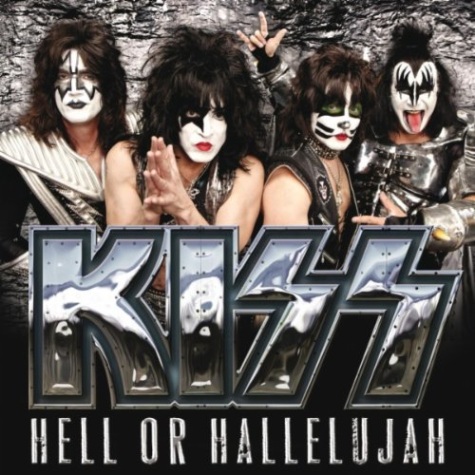 KISS return with “Monster”, the 20th studio album in their historic career, set for release in October through Universal Music Enterprises. The 12-track, straight-ahead rock ‘n’ roll album features collaborations among all four members — including co-founders Paul Stanley and Gene Simmons and longtime members guitarist Tommy Thayer and drummer Eric Singer — in an album that shows the band at the top of its game. And that’s saying something, considering their illustrious, 40-plus year history — 28 U.S. gold albums, the most gold records for any American rock band, 40 million sales in the U.S., and a total exceeding 100 million worldwide.

“Monster” is the group’s first studio album since the band’s 2009 smash success, “Sonic Boom”, and was also produced by Paul Stanley with Greg Collins at Conway Studios in Hollywood, California, and The Nook in Studio City, California.

The band’s first single, the full-throttle, autobiographical rocker “Hell Or Hallelujah”, will be available digitally on Monday, July 2, internationally, and on Tuesday, July 3, in North America. Stanley calls the album’s lead track, “a battle cry that encapsulates the entire record…one way or another, we’re going to do it our way.”

“Monster” represents KISS’ nod to the music that first inspired them to pick up their guitars and flame-throwers and don makeup to entertain millions. The group goes back to their own beginnings with THE WHO-like “Freak”, while Gene lives up to the title track’s declaration on the raucous rock of “Back To The Stone Age” and the bludgeoning “The Devil is Me”. Even guitarist Thayer takes a turn on his own with “Outta This World”. a tribute to his KISS “spaceman” character, while drummer Singer provides the vocals (and the back story) for the arena anthem “All For The Love Of Rock & Roll”.

“There are no symphony orchestras, boy choirs, keyboards, outside producers or songwriters on this album,” promises Gene Simmons. “The best thing we did was to turn inwards to ourselves. Tommy and Eric have revitalized this band, with a work ethic and the talent to back it up. This is a real band effort. KISS has become a behemoth. We’re going where no bands have gone before.”

On July 4, the day after “Hell Or Hallelujah” hits digital retail in North America, KISS crosses the ocean for its very own Tea Party, performing an Independence Day show at The Forum in London, a holiday most certainly not celebrated in the U.K., though this show might just offer some reparation for that bitter defeat in 1776. The concert will serve as a benefit for the British “Help For Heroes” organization, which raises money for its wounded, sick and injured troops. The band owes its own debt of gratitude to the English, admitting that “Monster” is influenced by the country’s great, legendary rock groups who influenced and inspired them to pick up their instruments in the first place.

“We’re all Anglophiles in this band,” says Simmons. “America may have invented rock and roll, but England knew what to do with it. They gave us THE BEATLES, THE ROLLING STONES, LED ZEPPELIN and THE WHO.”

Timed to coincide with the release of the “Monster” album is the deluxe coffee table, limited edition KISS Monster, a collection of artworks, 126 photos from the band’s 40-year career, including never-before-seen images from the world’s greatest rock photographers. The three-foot high, two and a half feet wide and two-inch thick Monster will be available in copies signed by all four band members and limited to only 1,000 copies worldwide. More info at www.kissmonsterbook.com.