‘Hear My Train A Comin’: Hendrix Hits London’ at Seattle’s Experience Music Project focuses on the nine months of Hendrix’s life from September 1966 to late 1967. 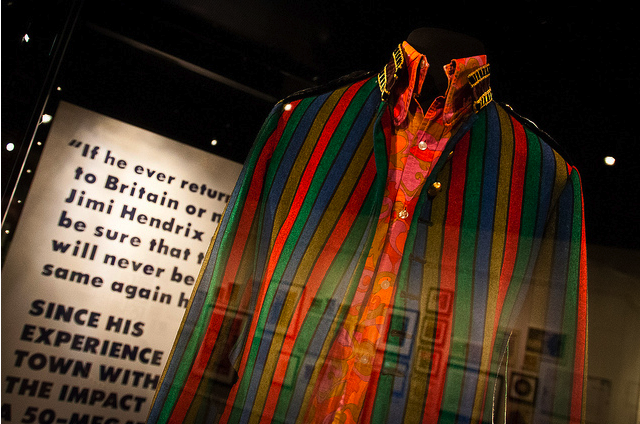 Hear My Train A Comin’: Hendrix Hits London, which opened at Seattle’s Experience Music Project museum on November 17, provides an in depth look at key period in the career of the legendary guitarist; the nine month period from September 1966 to the end of 1967 when he left America for England, and established himself as a musical force to be reckoned with, returning to the states in triumph for his landmark appearance at the Monterey Pop Festival.

EMP’s owner, billionaire Paul Allen, is a longtime Hendrix fan, meaning that EMP has such an extensive Hendrix collection the new exhibit was been compiled largely from its own archives. There’s always been a Hendrix exhibit at EMP since the museum opened, but as Senior Curator Jacob McMurray explains, this is the first time an exhibit has delved so extensively into one particular period of Hendrix’s career.

And though Jimi is the focus, the exhibit also reminds you that he was the leader of a band: the Jimi Hendrix Experience. “Hear My Train A Comin’” is able to round out the story by featuring a number of items from the estate of Mitch Mitchell. “Dee [Mitch’s widow] kept everything!” McMurray enthuses. There’s a display of items from Mitchell’s pre-Experience career (such as sheet music for the song “Anytime” by Mitchell’s band Riot Squad, the band neatly attired in black suits); a jacket made from fabric that looks like a map that got a thumbs down from “Disc and Music Echo” magazine (“Ugh!”; the same article also dismisses Jimi’s look as “quite horrible”); a fan letter where the writer politely notes “You’re always welcome for a cuppa [cup of tea] if you’re ever in Birmingham”; a telegram from Mitchell’s parents when the band began their first tour opening for the Walker Brothers (sharing the bill with Cat Stevens and Engelbert Humperdinck), reading simply “Good luck to the Experience. Mum and Dad.”

You can carefully trace Hendrix’s rise every step of the way. Along with the numerous article reproductions (more than in previous exhibits; there’s a lot to read), personal insights are offered via artifacts like a postcard Hendrix sent to his father in Seattle, that proudly states, “I have my own group and will have a record out in two months.” You see the publishing contract for Hendrix’s very first song, “Stone Free.” Albums from Hendrix’s own collection are on display, revealing his wide tastes; Ravi Shankar; the soundtrack of the Peter Fonda film The Trip; Johnny Cash At Folsom Prison; the Beatles; and Handel’s “Messiah,” which he purchased when he learned he was living in the same building where the classical composer also lived. At a nearby station, you can hear songs from these and other records Hendrix owned.

There’s no shortage of cool artifacts as well. Most notable perhaps are the remnants of his smashed and burned guitars, such as the one he played at a London show on June 4, 1967, where he played the title track of Sgt. Pepper’s Lonely Hearts Club Band and highly impressed Paul McCartney, who was in the audience, as Sgt. Pepper had just been released on June 1. You’ll also see part of the guitar he played and burned at the Monterey Pop Festival, as well as the guitar (unburned) he played at the Woodstock 1969 festival. The lyrics to “Love or Confusion” are written out on stationary from London’s Hyde Park Towers, with a drawing by Hendrix’s girlfriend Kathy Etchingham on the other side. And there are numerous items or clothing, and hats, that Hendrix wore; to make their display more interesting, clothing is usually shown alongside an album or magazine cover where Jimi is wearing the same item.

The exhibit is big enough to span two rooms. Among the video offerings, there’s 15 minutes of silent footage featuring the Experience playing the Savile Theatre (site of the June 4, 1967 show). A mixing station allows you to do you own mix of Hendrix’ songs. Another station features an iPad that gives you access to more articles and a chance to listen to other songs in the Top 10 at the time.

A lot of care has been taken to convey the feel of “Swinging London” at the time Hendrix first arrived there; the clothes stands even feature baroque-style curly bottoms, as if borrowed from some London boutique. There’s also a sense of innocence, with the Experience pictured as teen idols on magazine covers; though he’s a legend now, Jimi was initially marketed as a pop star. McMurray describes Hendrix’s rise as “a weird, freaky journey,” and “Hear My Train A Comin’” certainly helps you experience that trip in a whole new way.

The exhibit is currently scheduled to run for three years. November 27, 2012 is Jimi’s 70th birthday, and EMP is celebrating by offering free admission to 70-year-olds. If you’re not 70, you still get free entry into EMP’s Sky Church, where Hendrix footage will be shown on the giant screens. You can then toast the memory of the guitar god at EMP’s POP Restaurant + Bar, which will be offering 50% of its signature cocktail, the “Purple Haze” (which Powerline has yet to sample).

For more information on Hear My Train A Comin’: Hendrix Hits London, go to www.empsfm.org